Changing the Face of the Boardroom: Marie Skrodzki 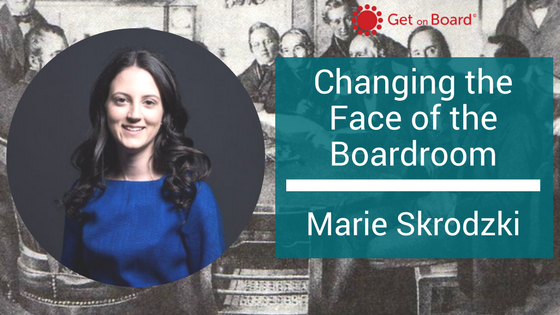 In this interview series, we take a look at life as a ‘non traditional’ board member and the benefits they bring to boards and organisations.

Today we’re talking with Marie Skrodzki, an under-30 board member of Adelaide-based SANFL football club Norwood. When Marie joined Norwood Football Club’s (NFC) board in 2016 she became the first female director in the Club’s 137-year history. What a groundbreaker!

GOBA: What is unique about you as a board member?

MS: I was the first female director in the Club’s 137-year history and I’m sure my fellow Board Members wouldn’t be offended if I suggested I was at least a few years younger than the rest of them.

I had no real interest in Aussie Rules Football prior to joining; I much preferred the round ball football (soccer). I was not a passionate Norwood supporter as all of my fellow Board Members are and were at the time they joined the Board. I can now, hand on heart, say I love the Club – I get emotional and tear up at most games regardless of whether we win or lose. I find the Norwood Football Club Community to be such a special one and one I’ll be a part of forever.

GOBA: How did you get your board seat?

MS: Paul Di Iulio, the President of NFC was the CEO of the City of Campbelltown where I was previously an Elected Member (and the youngest there too!).

The NFC Board had identified a skills gap and was looking to bring onto the Board someone in the digital/marketing space – my day job is a Digital Strategist at Nexia Edwards Marshall, so I fit the bill. Paul gave me a call and asked me to come in for an interview.

They offered me the position and I accepted on one condition, that I wasn’t going to be the token female. I was assured I was being offered the position based on my merits. Honestly, that is how I feel in meetings now.

GOBA: How does your uniqueness benefit the board / organisation?

MS: In my opinion, your uniqueness on a board is probably not that dissimilar to your organisation’s membership, clients, and supporters (or potential supporters). So being “different” means you can assist the organisation in relating to all those people.

At NFC I think being younger assists the organisation because digital is disrupting the way organisations operate. Being younger gives me the advantage of having grown up with the technology and hence I have a good grasp of what’s possible and what younger fans are wanting and expecting from their football club.

GOBA: What has your experience on a board been like? Do you feel that your differences are a benefit or a hindrance?

MS: Our membership was probably a little bit sceptical of my appointment not because of age or gender but I remember The Advertiser did an article on my appointment which highlighted I had no previous relationship or affiliation with the Club and the comments were all around “how can you let someone who isn’t a supporter onto the Board”. I think the fact that I wasn’t a supporter when I joined was a positive because I saw everything from a fresh perspective (which I think is probably the biggest benefit of being “different” to the other Board Members).

Overall, it’s been great, I always feel like my opinion is respected and valued. It took a bit of adjusting for my fellow Board Members, for example they didn’t feel comfortable swearing around me (which previously they must have done a bit – especially in the heat of the moment at a game!) so they would apologise every time!

GOBA: What advice would you give to people in a similar situation to you?

MS: Trust your judgement and go against groupthink. In the beginning when I was a Councillor I used to get nervous voicing my opinion especially if it sounded completely different to what the rest of the Elected Members were saying. I learnt over time that the reason I was there was to bring a different perspective, and often the other Members hadn’t thought of it from my perspective and agreed.

[heading] ABOUT CHANGING THE FACE OF THE BOARDROOM [/heading]

Many times I am told by aspiring board members that they feel like they are not qualified for the boardroom, or that they have nothing to offer. Much of this self-opinion comes from the perception that is reinforced in messages about the boardroom; you have to be old, connected, conservative, and extremely educated to be on a board.

I call BS on this!

I am certain that there are many wonderful board members out there who don’t fit the traditional “pale and stale” stereotype of company directors / board members. People who came to the boardroom along the path less travelled, with a unique career background or because of some rare characteristic that has proved invaluable for an organisation.

I know they’re out there and I want to profile them to show aspiring directors that they do have something to offer. That the boardroom is somewhere they can thrive and give back; and that their uniqueness can have extraordinary value to an organisation. I want organisations and people everywhere to know it too.

[heading] READ OTHER CHANGING THE FACE OF THE BOARDROOM PROFILES [/heading]

The Board of Mr.Perfect