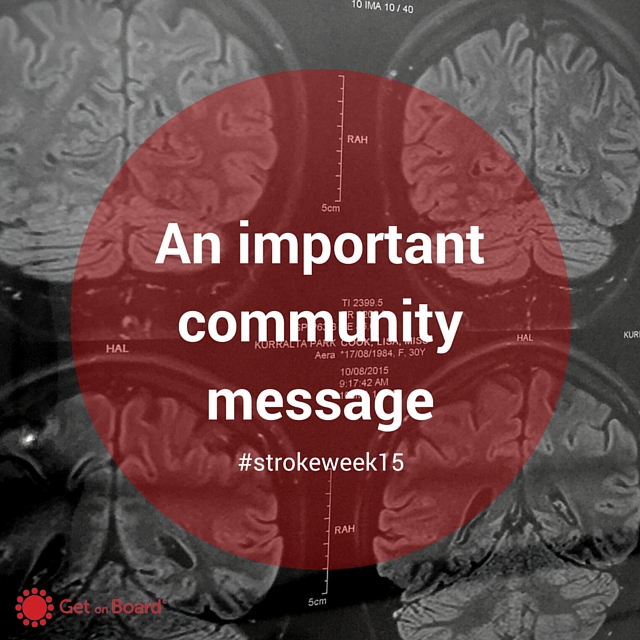 I don’t usually use this platform for personal reasons. But, as I often say, some rules are meant to be broken. And this is an exceptional circumstance that calls for a rule break.

This week (14-20 September 2015) marks National Stroke Week in Australia. And why this is important to me is because about seven weeks ago I had a stroke.

At only 30 years old, I was floored when my radiologist gave me that diagnosis around 12 days after I passed out and woke up an hour later in the emergency department at St Vincent’s hospital. So this whole stroke thing has quickly become a big deal to me, and my loved ones. Thankfully for me, my stroke was rather minor (usually called a TIA), and you would have no idea that I’ve had a stroke if you look at me. I am incredibly lucky.

However, since then I have wondered why a “perfectly healthy” 30 year old would have a stroke; reflected on life with a perspective usually reserved for people much older than me; and adjust to a ‘new normal’ life.

Stroke in young people – anyone below the age of 45 – is becoming a more frequent occurrence. John Hopkins Medicine reports that 10% of all strokes happen in young adults (out of around 800,000 total strokes annually in the US). These can be due to a variety of uncommon conditions, such as arterial dissection, vasculitis, cerebral vein thrombosis, and moya-moya syndrome. However, a 2013 paper by Sultan and Elkind reported that young adults [who suffer from a] stroke also have a high burden of traditional cardiovascular risk factors, including hypertension (high blood pressure), diabetes, obesity, and substance abuse.

In addition to that, those who regularly get fewer than six hours of sleep a night have an increased stroke risk, even if they don’t have a history of stroke, aren’t overweight and don’t have an increased risk for obstructive sleep apnea. Generally these findings are applicable to middle- to older-aged people, but they are something that you should understand and use as an incentive to start getting good sleeping habits now. Making sure you get at least 7 hours of good quality, continuous sleep every night will hold you in good stead in the long run.

Facing a stroke diagnosis was incredibly overwhelming. Particularly when you realise the damage that could have resulted from it, and when you start to realise all of the family, friends, and colleagues you would miss had the worst-case scenario occurred. It’s bloody scary. And I think the hardest part to overcome.

Forever the eternal optimist, I see that there is a silver lining to this cloud. And to this end, I have become strengthened in my resolve to see how I can better use Get on Board and my board positions to help more people. I figure that there is clearly a reason why I was spared the worst effects of a stroke, and that I must prove myself worthy to whichever entity or force played a hand in my successful recovery.

Combined with the emotional challenge of coming to term with being a ‘stroke victim’ – or, as I prefer, a ‘stroke survivor’ – I have had to adjust my life. I understand that doing the same things I did before and expecting a different outcome (i.e. not having another stroke) is the definition of insanity.

I was someone who prided themself on working their butt off. Day in; day-out. I could work anyone under the table. These days, I just can’t do that. Physically I am limited in how far and hard I can push myself. In the weeks immediately following my stroke I was exhausted from simply existing. Now, about seven weeks out, I can work half to three quarters of a day before I hit the wall.

But it kills me that I am still limited.

I haven’t fully accepted that identity change and it feels like I am mourning the loss of my closest friend (and I still cry when I write about it, think about it, and talk about it).

I am working on “Lisa 2.0” by mentally priming myself to accept my limitations, and to not let them define who I am. If I am tired, I take a break. Some days I even take a break before I get tired. How novel to have an actual lunch break these days! If I can’t finish a task, I try not to beat myself up about it, and I leave it for the next day to complete. I go to bed earlier and sleep a little longer in the morning. I have begun exercising in the evenings so that I can ‘sleep in’ of a morning.

These all seem like quite simple changes – and are things that we really should all already be doing anyway. But changing is hard. However, knowing what awaits me if I don’t change is a powerful motivator.

So what’s the moral of this story…? We all hear it and nod and agree when someone says it, but believe me when I say it; appreciate all that you have in your life. Tell those people you love that you love them. And live life fully. It could all be gone (or changed) in the blink of an eye.

And since it is stroke awareness week, Be Aware (of what stroke is, how to recognise a stroke and what to do) and Live Healthy (to reduce the risk of stroke), and Get a Regular Health Check (to know your numbers and see if you’re at risk). Visit www.strokefoundation.com.au for more information and to donate.

I can’t believe that it’s been over 12 months since my stroke – I celebrated that on July 28. Now that it’s stroke week again I thought that I would update you all on my journey since my above post (originally published on 18 September 2016).

Firstly, the response I had to this post and the well-wishes shared by the stroke community was incredibly overwhelming and emotional. I was deeply touched and thank you all for taking the time to send me love, positivity, good health, and that I wasn’t alone in this.

So, what has happened since last year. Well, it turns out that my stroke wasn’t a TIA. It was a good-and-proper one that has left a lasting impression on all future brain scans! That was kind of annoying and weird to learn about – also quite emotionally intense when you realise how catastrophic it could have turned out.

After my diagnosis I was scheduled in to undergo some heart examinations to see if I had something called a PFO (a patent foramen ovale). This little hole in your heart serves a purpose when you’re in utero, and should close over by the time you’re a toddler. It turns out mine didn’t. And the test you need to have to find this hole involves a TOE (trans-oesophageal echocardiogram) test under sedation.

It turns out that nothing is straight-forward with me – a recurring theme during this phase of my stroke journey.

I didn’t cope well under sedation with the TOE and so the test was not successful in the clinic. So two days later I was admitted to hospital to be fully knocked-out so the test could be done without me getting in the way, so to speak. The test was positive and I was informed that I have a “very flappy PFO” and it needs closing.

Cue the visions of open-heart surgery!

Luckily, these doctors are pretty clever and the procedure to close a PFO is minimally invasive and only requires an overnight stay in hospital. Check out this YouTube video that demonstrates how a PFO closure procedure works.

In true Lisa fashion, I had an allergic reaction to the antibiotics they put me on before my procedure (add it to the list!) and the blood-pressure cuff got stuck around my arm as I was laying on the operating table (FYI: that really hurts).

After that drama, the procedure went smoothly, and I woke up in the cardiac ward saying to myself “well that was quick!”.

A month post-proedure it was clear that the closure device had shifted and was stuck in an open position, meaning I still have a leak and the potential of another clot getting through. Great. My cardiologist prescribed me with medication FOREVER! Yep, I have to take a pill everyday. If it means a safer life without another stroke, I’ll take it. I was a little cranky though.

Along side the heart thing, I was diagnosed with some positive blood antibodies (when you have a stroke at a young age, they test you for Lupus). Currently I have no outward issues with this; however, see a Rheumatologist annually to keep an eye on things.

It feels like I spent the majority of the second half of 2015 either anaesthetised or still under the affects of anaesthetic. Not a great time.

I’m happy to say now that I am pretty much fully recovered – I’m back at the gym, working hard, and enjoying life.

I’d like to take this time to thank the National Stroke Foundation and the great work and support that they offer, even via social media. One of the greatest feelings is that you’re not alone on this journey and there is a community out there who will wrap their arms around you and lift you up.

Remember: appreciate all that you have in your life. Tell those people you love that you love them. And live life fully. It could all be gone (or changed) in the blink of an eye.

The Art of Stakeholder Relations for Better Business Outcomes
Signs That it May be Time to Sell the Business
ESG: Three Things for All Boards to Learn | Ep. 48
In Focus: Risk Management