On Influence and Conflict in the Boardroom 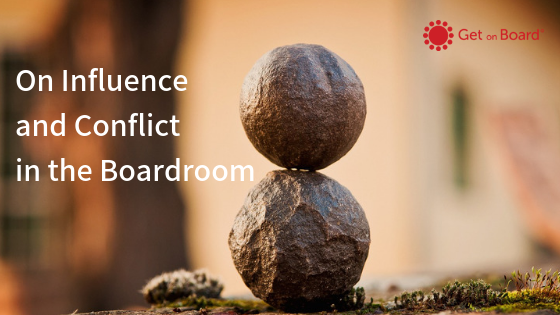 I was doing some research for another article that I had planned to write and something a little more ‘profound’ hit me. I felt it better to write about *that* topic as it also came up in a conversation I had earlier today with a CEO in relation to some recent behaviour of her board members.

That’s around the intertwining of influence and conflict. Not the ‘let’s fight’ kind of conflict, rather, the opposition of competing interests type of conflict.

It struck me that we focus so much on conflict of interest in the context of the potential commercial and financial gain that can be attained if I use my position inauthentically, rather than how influence can be leveraged to create a desired personal outcome (i.e. not financially related) through a non-traditional conflict.

I know this is starting to get a little esoteric. I’ll try and bring this back to earth with the examples I came across today:

The Chair of a Board who is also the Chair of the Governance Committee.

The board member who helps a long-term colleague gain a board seat on the same board.

This is a situation that exists on many boards. The long-term colleague likely now feels that they owe their friend for helping them get a seat at the table. The existing board member knows this and now has an increased level of influence over this person; they could expect them to vote the way they vote, hold the same perspective on significant issues as they do, or start to form a coalition to execute any number of outcomes. Again, we see a high level of influence creating the potential for significant conflict.

I want to take a brief segue to look at the definitions of influence and conflict:

These definitions raise a question in my mind:

Where there is influence, is there also conflict (both real and potential)?

As directors we are required by law to disclose any real or potential ‘material’ conflicts of interest.

Many commercial conflicts of interest are quite easily recognisable and relatively easy to control. What about when conflicts are more covert; like in the examples given above? Since they are not directly commercial in nature, are they recognised as not important, if recognised at all?

Whilst it may be that some conflicts are perfectly legal, does that equate to them being moral and in the best interests of the members/shareholders?

The Australian banking royal commission has raised many philosophical questions related to the governance practices of financial institutions. As directors I believe that we should ask the same questions of ourselves and of our own organisations regardless of size, sophistication, and scope.

I’m interested to hear your thoughts on influence and conflict. Please share them in the comments below.

How to Handle an Underperforming Director
Trouble at the Top: How to Soothe the Pain Points for Board Recruitment
How to be of Service to your Fellow Board Members
Director Learning and Development: What is it?