Towards True Board Diversity 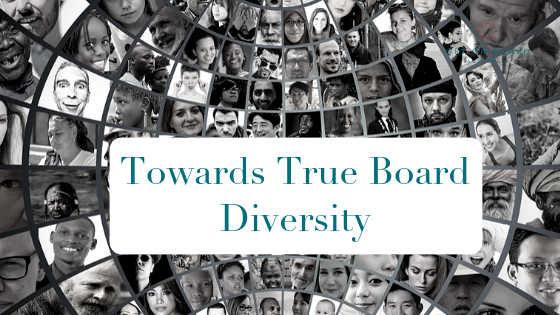 For a long time now I have not weighed in on the boardroom diversity debate. I think I have a pragmatic view of this issue, and most people I speak to about it tend to hold similar perspectives. I hope that this post can be read with an open mind, a balanced perspective, and I invite constructive conversations around it if you wish to put forth your, equally valid, views.

Gender ‘diversity’ on boards and in senior management has been the topic du jour for some time now. There is a plethora of articles, opinion pieces, and research that backs up the case for greater representation of women in leadership positions. And so there should be. The gender equality debate has achieved many positive outcomes and continues to do so.

However, I feel like we do ourselves a huge disservice by only focusing the diversity conversation heavily on gender. I would very much like to see us make further inroads into board diversity by broadening the conversation beyond gender balance. True diversity cannot – and should not – stop at gender alone.

This world is made up of more than just ‘men’ and ‘women’, particularly now with the definition of gender becoming more dynamic. Of course this shouldn’t come as a revelation. Australia’s anti discrimination laws – the first being the Racial Discrimination Act in 1975 – point to a slew of attributes that can be used to define (and discriminate) us – race, skin colour, religion, political opinion, national extraction, social origin, age, medical record, criminal record, marital status, impairment, disability, nationality, sexual preference, and trade union activity, just to name a few.

To illustrate my point, I will use Adelaide as an example. Using 2011 Census data*, there are approximately 19,600 people living in the city of Adelaide; with 51.7% being male and 48.3% being female. When considering ethnicity, 27.4% identify as having English ancestry, 18.7% Australian, 16.6% Chinese, 5.9% German, and 3.8% Indian to name a few. Furthermore, 32% of people in the City of Adelaide, came from countries where English was not their first language.

Roman Catholic was reported as the main religion (15.3% of population), with 5.6% following Buddhism, 3.2% Islam, and Greek Orthodox and Hinduism each followed by 2% of the population. Surprisingly, the number of people reporting as being “non religious” experienced the greatest change, increasing from 26.1% in 2006 to 34.1% in 2011.

In the greater Adelaide area, 55.3% of people are aged over 35 years. 3.2% of the population in the City of Adelaide reported needing help in their day-to-day lives due to disability.

When considering education level, nearly half (46.3%) of the greater Adelaide area holds no formal qualification, and 18.2% have attained a bachelor or higher degree.

I could keep going. As you can see, we are all made up of a wide range of non-gendered characteristics. Why then are we focusing the diversity conversation on gender alone?

Why should diversity matter?

A study cited in the Strategic Management Journal demonstrated that both gender and ethnically diverse boards are more likely to:

Research by McKinsey demonstrated that more diverse companies were better able to secure top talent employees, improve their customer focus, increase employee satisfaction, and improve decision making, leading to an ongoing cycle of increasing returns. McKinsey suggests that even “diversity in age, sexual orientation, and experience (such as a global mind-set and cultural fluency) are likely to bring some level of competitive advantage for [diverse] companies.”

What this means for boards

In my “sophisticated” straw poll of my fellow board directors, the majority agreed that the board should represent and reflect the stakeholders and/or customers that the organisation currently services, or wishes to serve in the future. Often this is not just a ‘men’ or ‘women’ demographic.

For example, if your business has a strategic goal of expanding into China, you may want to consider having someone from China, or someone who has a deep and rich understanding of or experience in Chinese culture, on your board.

Having proactive recruitment policies, utilising creative recruiting strategies, and being open to having staff work in different ways (e.g. remote workers) opens the organisation up to accessing a deeper talent pool (also known as, a diverse workforce).

Programs with the objective of developing our future leaders would benefit from involving a diverse range of individuals. This diverse learning environment provides a realistic context for participants to grow, develop, and understand how to work with people from different cultures, genders, age, life situations, and backgrounds.

Organisations have the opportunity to take advantage of the benefits that a diverse leadership team delivers. The higher returns that diversity is expected to bring – as demonstrated in the McKinsey study – show that businesses are better off to invest and facilitate true diversity in their organisations sooner rather than later.

Diversity in the boardroom and organisation is a cause we should all be championing. It can produce tangible benefits to the board team and staff. I encourage your board to introduce methods to increase its diversity across the organisation.

I’m interested to hear what your thoughts are on diversity in the boardroom. Share them in the comments below

The Worst Pieces of Advice I’ve Heard as a Director
When a Board Member Cheats, Everyone Loses
How the Best Boards are Leading Through COVID-19 with Julie Garland-McLellan | Ep. 22
Five Self On-boarding Strategies
diversity