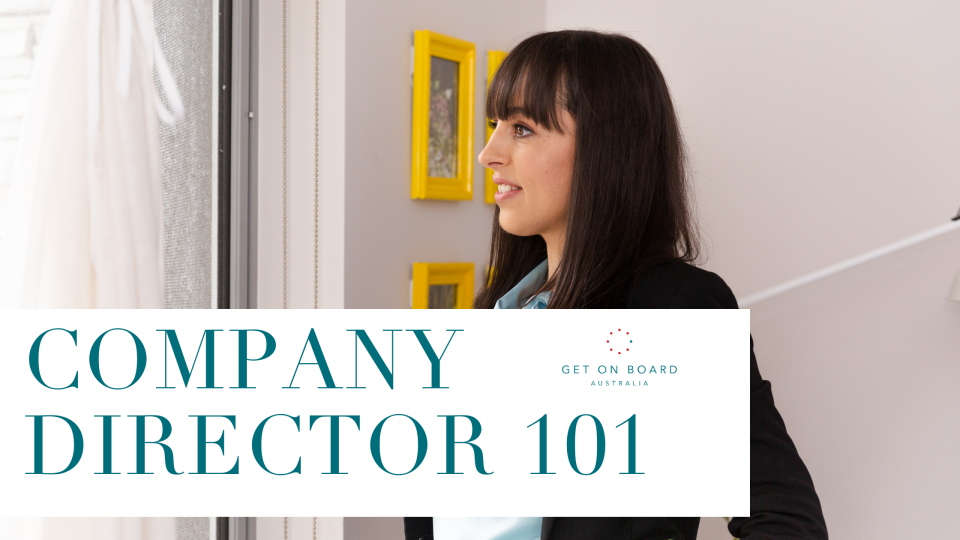 As you begin your board journey, or endeavour to go further with it, there are a lot of new words and concepts to understand. It’s very easy to fall into the trap of assuming that we know what all of these terms and phrases mean and what these therefore consequentially mean for us.

As smart people we also know that assuming is a dangerous activity!

That’s why I wanted to explore a little into the world of ‘company director’ and what it actually means as a phrase, when it applies to you (and when it doesn’t), and what having that title brings with it under the law (and which law is applicable).

So let’s start at the beginning…

What is a Company Director?

Under the Corporations Act 2001 (Cth) a company director is legislatively defined in section 9 as:

director of a company or other body means:

(i)  is appointed to the position of a director; or

(ii)  is appointed to the position of an alternate director and is acting in that capacity;

regardless of the name that is given to their position; and

(b)  unless the contrary intention appears, a person who is not validly appointed as a director if:

(i)  they act in the position of a director; or

(ii)  the directors of the company or body are accustomed to act in accordance with the person’s instructions or wishes.

Subparagraph (b)(ii) does not apply merely because the directors act on advice given by the person in the proper performance of functions attaching to the person’s professional capacity, or the person’s business relationship with the directors or the company or body.¹

From this, we can see that the title (and all of its accompanying duties and responsibilities) of ‘director’ can be bestowed upon an individual based on their actions and behaviours, even if they have not been properly appointed to the position of director. This is something to keep in mind!

Company Directors are responsible for oversight of the affairs of the company. You must comply with your legal obligations as a director under the Corporations Act 2001. This is the case even if you appoint an agent to look after your company’s affairs. As a director, you must be fully up-to-date on what your company is doing, including its financial position, question managers and staff about how the business is going and take an active part in directors’ meetings.²

Under the various state and territory legislation, a ‘company director’ is someone who is elected / appointed (under the rules of the association) to manage the affairs of the association with proper care and diligence. Individually these people are referred to as ‘committee member’ or ‘management committee member’ (because they technically are not ‘directors’ of a ‘company’), and collectively they form a ‘committee’ or ‘management committee’.

Who can be a Company Director?

The criteria that a person must meet to be eligible to become a company director is not extensive. They must:

Who can be a Committee Member?

Individuals who want to become a committee member have similar requirements as a company director; however, each state and territory determines its requirements. A generalised overview of these various requirements is provided in the table below:

* Check your relevant legislation for a full description.

The accidental Company Director (aka: Who is a director without knowing they’re a director)?

This is known as a Shadow Director or de facto Director.

It may carry civil or even criminal liability for breaching director’s duties, despite not being a properly appointed company director.

More information on Shadow Directors can be found here and here.

This is not to be confused with an Alternate Director; who is a person appointed by a current company director to act on their behalf at board meetings. The original director maintains responsibility and accountability of the alternate’s acts.

If you’re interested to go beyond the information in this article, you are welcome to access the live Masterclass that I delivered on this topic in the Board Talk community.