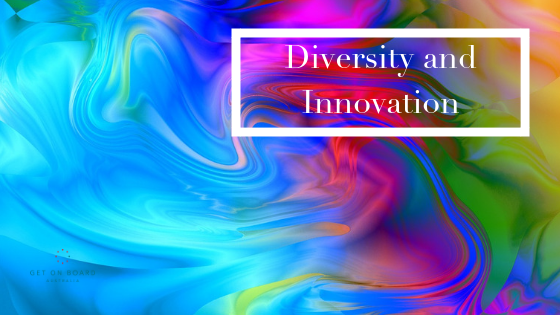 Imagine an organisation that is facing significant industry change now and into the near future. The board ticks all the diversity boxes when addressing their ASX corporate governance guidelines. But they are struggling to keep up with the enormous changes happening now in consumer buying behaviours and the significant industry disruption coming over the horizon. Their solution? “Innovate” the business by adopting a model used by a similar overseas organisation… in 1973.

Taking a quick look at this board, there are eight board members; three of which are women. There appears to be no racial diversity (all are of Anglo-Saxon appearance). And they all look over the age of 50.  There is some international exposure (although mostly all in the UK). There appears to be no committee-only members. Considering this organisation, I would have expected something a little different (diversity is a good start) considering what they are facing; a share price that was $3.32 on 31 December 2010 and closed at 84c on 27 June 2017 (update: 65c as at 21 May 2019).

History will tell us how the stories of these two companies will pan out. Without radical change at the top of the first company, I am quite nervous.

Throughout the past month I wrote and talked about innovation in the boardroom. I’m going to continue this conversation for a little longer because there is an area of this conversation that we have not directly addressed (and we have been asked to – thanks Sarah B!). And that is the impact of diversity on innovation.

Before I jump into a response, I first want to clarify a few things.

Firstly, what do I mean by diversity?

This post outlines my perspective in detail. In a nutshell, diversity is a true all-encompassing term that goes beyond only male vs. female to include age, race, religion, socioeconomics, experience, expertise, sexual preference, gender as a spectrum, and any other identifying characteristics.

Secondly, what do I mean by innovation?

In a recent podcast, I talked with Noel Verma about what innovation actually is. It turns out it’s not just about creating the next Uber or Air B’n’B or Google. It also includes ongoing process, product, and service improvements and evolutions. So when we say innovation, we mean both incremental improvement and radical change.

The Impact of Diversity on Innovation

Dr Catherine Ball demonstrated the above versions of Nixie – a wearable drone with a camera (great for taking selfies) – and the need for people with an arts background to create technology that is both beautiful and functional.

Research presented in the December 2013 (!) edition of Harvard Business Review provided compelling evidence that diversity has the ability to unlock innovation and drive market growth.

Their definition of a diverse organisation was one whose leaders exhibited at least three inherent and three acquired diversity traits. This was called two-dimensional (2D) diversity.

How did diversity make this happen?

Diversity – that is specifically embedded from the top down – creates an environment where alternative ideas and perspectives are heard. When diversity forms a critical mass and the leaders really value differences, employees can find senior people to champion compelling ideas and can influence the board to invest resources to progress those ideas.

Furthermore, research conducted by McKinsey demonstrated that more diverse companies were better able to secure top talent employees, improve their customer focus, increase employee satisfaction, and improve decision making, leading to an ongoing cycle of increasing returns. “Diversity in age, sexual orientation, and experience (such as a global mind-set and cultural fluency) are likely to bring some level of competitive advantage for companies.”

Start by Building a Diverse Board

These posts will help you get started with building a board that is reflective of your clients/customers (a great place to start):

How will you start the diversity and innovation conversation on your board?

Subscribe to Receive Articles, Resources, and Tools to Support Your Board Career, and join our FREE Board Resume Writing e-Workshop.

Finding and Recruiting Board Members
In Focus: End of Financial Year
Bringing Entrepreneurial Thinking into the Boardroom
Five Questions to Ask About Your Board Recruitment