Board Members are People Too 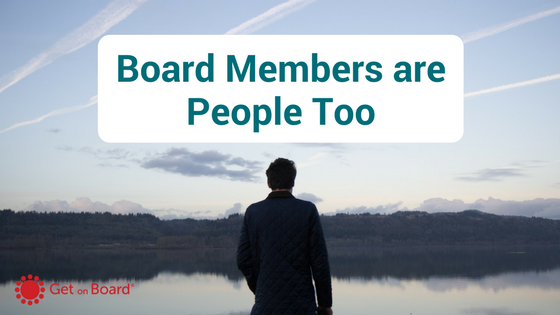 I’ve had a pretty average start to my board year. However, I’ve now reached a point where I can talk about my experiences and lessons learnt without the emotion. My experiences have led me to some sort of enlightenment (well, for me anyway). Unfortunately the path was painful.

I’m sharing the two negative board experiences I’ve had so far this year and the lessons that you can take away from them in the hope that you can avoid these situations in the future.

1. Having the rug pulled out from underneath me

I totally didn’t see this coming. What started out as any other board gathering in the lead up to a meeting quickly turned upside-down as our dinner plates were being cleared.

As I was still chewing my last mouthful of dinner, the Chair was informing me that ‘the board’ was not going to reappoint me for another term. I was about to ask if they were joking when, at that moment, a fellow board member informed me that ‘this happens all the time with appointed directors’.

My stomach dropped and I immediately felt like my dinner was about to do an encore. To say I was shocked was an understatement.

Where it went wrong

I don’t take issue with not being reappointed. It was a very logical move based on business requirements. I would have made the same decision; however, it quickly became clear to me that the group who made this decision wasn’t ‘the board’ at all as I wasn’t included in these conversations. And the conversation around current director skill set and business needs was never had around the board table.

Furthermore, the conversation about my position on the board had occurred as I was sitting in another state far from home. Why let me travel all that way only to tell me I wasn’t on the board anymore (and expect me to be able to sit through the board meeting the next day)? And why have this conversation in front of half of the board during a meal?

The lessons that you can take from this experience can be viewed from two perspectives – the board, and the director in question (me in this case).

Conversations around director terms, succession, and business requirements should be ongoing. At the very least between the Chair and each board director, and – for really progressive boards – the board as a whole (usually at board meetings). I actually sit on a board where this happens, so it is possible.

No one should ever be in a situation where they “all of a sudden” find out that their term is up and they’re out because “the board” is requiring a different skill set due to business needs. It is extremely uncomfortable and embarrassing to be told you are no longer wanted, particularly when you least expect it.

If you are informing a director that their term is up and the other directors think that person’s seat at the table is better filled with a different skill set, please do it in a private meeting between the Chair and the director. Preferably face-to-face (or at the very least in a phone conversation), in a manner that allows the outgoing director to make it appear that they are choosing to step off the board themselves, and prior to the next board meeting. Expect that the outgoing director won’t attend the next board meeting – if others know they are being shunted how could this person expect to contribute meaningfully and/or be taken seriously by the existing board members.

Firstly, I need to keep track of my board appointment anniversaries. That way I can be the one to initiate the conversation with the Chair around expectations of me sticking around or stepping off.

Secondly, I should have checked-in from time to time around how my contribution was perceived and received by the Chair and other board members. This is why a great Chair is so critical on a board. They have continual conversations with all board members around performance, hot issues, and other important matters to get a good feel for the ‘lay of the land’. Although my performance wasn’t an issue in this instance, I think having an open dialogue would have led to a different outcome (i.e. without the awkward dismissal).

Thirdly, always consider the person on the other end of the message. Put myself in their shoes and consider what it would be like for them to receive what you’re about to tell them. How can you make it the least awkward, painful, and embarrassing for them?

2. Chair out of Control

It had been brewing for a while now and I finally had enough. I walked out of a board meeting. The Chair had completely lost control of their emotions and had jumped in on a verbal attack against me. While they were at it, out came a whole bunch of other stuff that had clearly been on their mind for some time. It became disrespectful, spilled in to the next agenda item, and the only way to stop the barrage was to walk out.

Where it went wrong

Unfortunately I am not completely innocent on this one. I did something that really could have – and should have – been done in a better way. I was frustrated and I wanted to prove a point. The Chair had done something – against committee directions – that could have put the business and all of the directors at significant financial risk.

We needed legal advice and I had advised the board that I was going to seek it out. Our legal advice turned out to be the best outcome for all and I was delivering an update during the board meeting on my email circular about it. Then it got out of control. Two board members started debating the issue that had already been discussed and resolved at last month’s board meeting. The Chair felt emboldened by this, and rather than putting a stop to a discussion that had already been resolved, they jumped on board and argued about what had happened. Around in circles it went until it reached the tipping point and I walked out.

Again, there are two learning perspectives in this instance.

As a board member, once an issue has been discussed, agreed to, and resolved, let it go. The only time that it may be suitable to reopen a resolution is if it is absolutely critical and there is new critical information to add that may affect the decision that was made. Otherwise, let it go. Even if you don’t agree with the decision. Be a team player.

As a Chair, if a fellow board member has done something to bother you, talk to them directly and do it away from others and from the boardroom. Be an adult and confront issues and concerns directly. Furthermore, keep a lid on your emotions during meetings. If something has riled you up to the extent where you feel like you’re going to burst, order a brief recess and step outside to clear your head. Take control of your emotions and take control of the meeting. If others are bringing up past issues already resolved, interject and mention that this matter has been resolved and it’s time to move on.

Lastly, being a Chair does not entitle you carte blanche authority and/or permission. Some decisions are required to be made by the board as a whole. The rules are there for everyone’s protection, good governance, and risk management. Don’t take actions without board approval and your chances of doing something that p***es off the board reduce significantly.

Always, always address issues with something that someone has done with the Chair, even if the person who has done something wrong is the Chair. I’ve had to do some relationship mending since this event and it’s not been very conducive for harmonious relations.

Have courage in my convictions. I think I did this well. As much as others may have been bothered by my view on an issue or by my actions, I still feel and know that I made the right decision for myself and my comfort level as a director. Know where your boundaries and level of standards are and stick to them.

One thread that has weaved through both of these experiences is that board members are people too. I tend to be quite hard-nosed on governance; maybe to a point where I saw my fellow directors like robots that should follow strict rules and orders. I am starting to soften that perspective without losing the operating standards that I think all directors should adhere to. I’m still a work in progress though.

Why is it always that the best lessons are the most painful to learn? Perhaps the bad feelings make them easier to remember and make them far more perceptible. I hope my experiences and lessons help you to avoid getting in to the same situations in your board career.

What boardroom lessons have you learnt?