Board of directors, management committee, advisory board, or board committee: Where are you sitting? 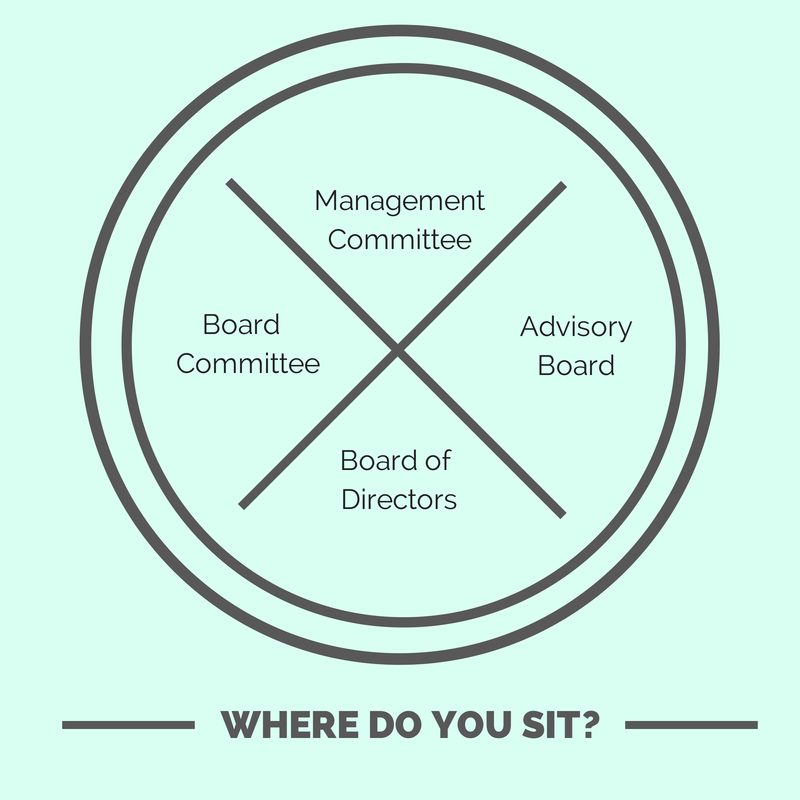 On our website we use the term ‘director’ and ‘board member’ to include everyone who sits on either a board of directors, management committee, advisory board, or a board committee / sub-committee. We do this because we feel that it is best practice to approach any board or committee role as if you were a director bearing the same duties and responsibilities.

Whilst there are some differences between each of these groups, the requirements and expectations placed on them can be quite similar.

Whichever table you sit at, this article aims to introduce you to each of the features and main responsibilities of each group. Future blog posts will take a deep-dive into each of these groups, looking at their functions, structures, and management.

A board of directors consists of people elected by the company shareholders, or appointed by the other company directors / current board members, to be responsible for the performance of the organisation, and its compliance.

Whether a for-profit or not-for-profit, the board is responsible for the sound and prudent governance of the organisation – ensuring the system of structures, rights, duties, and obligations by which corporations are directed and controlled meet legal and ethical requirements.

People who sit on a board are called Company Directors – either executive directors, or non-executive directors (NEDs) – and have a range of expectations and responsibilities that come along with being a company director (you can read more about those here).

Investopedia gives us a very simple explanation for this type of board: “… the board of trustees will be responsible for holding “in-trust” the funds, assets or property that belong to others with a fiduciary duty to protect them.”

This shows us how similar a Board of Trustees are to a Board of Directors, and you may find the two terms used interchangeably.

Each state has its own Trustee legislation that defines the duties, responsibilities, rights, powers, and other requirements of Trustees.

Management Committee / Board of Management

Also sometimes known as a ‘council’, or just a ‘committee’, a management committee consists of people elected by an organisation’s members to represent and advance their interests.

Management committees can usually be found in smaller organisations such as not-for-profits and sporting clubs. Members of a management committee will have very similar legal expectations and responsibilities as a traditional ‘company director’; however, these duties generally come from a different piece of legislation (for example, state- and territory-based Incorporated Associations legislation) depending on the company structure.

The role and responsibilities of a committee of management are not dissimilar to that of a board of directors. However, management committee members may have a greater role in the day-to-day activities of the organisation due to its size and limited resources.

A definition of an advisory board is a group of people (usually skilled professionals) who have been selected to help a business owner by advising and supporting them on any number of business matters.

Advisory boards are usually unofficial (i.e. not made up of formalised company directors listed with the company through ASIC or the ACNC). Therefore advisory board members do not generally have authority to vote on corporate matters, nor carry a legal fiduciary responsibility. They are not directly regulated under the Corporations Act, or in corporate governance codes. It’s important to note that the Australian Institute of Company Directors* are clear to remind us that “… calling a board that has a governance function an “advisory board” does not preclude its members from their legal duties.”

A board committee is a group of people to whom some specific role or purpose has been delegated by the main board. Established to build expertise and lessen the workload of the full board, the role of committees is usually to research, review and make recommendations, and advise the board on specific matters. Generally made up of board members, committees can also have independent members (i.e. non-board members).

Committees have limited authority, power, and responsibilities, and each committee should operate under its own charter or terms of reference. The board retains ultimate responsibility for any actions made by the committee.

All of these groups have significant differences; however, through the eyes of the law, are viewed through quite a narrow spectrum. Anyone who sits on any of these groups needs to always keep in mind that even though they may not be an “official company director”, if they have similar responsibilities, and undertake similar activities to a traditional director, the chances are they will likely be perceived as one, and have the same expectations and accountability. If it walks like a duck and sounds like a duck, it’s probably a duck!

At the end of the day, it is best practice to approach any board or committee role as a director bearing the subsequent duties and responsibilities.

Five Considerations when Networking for a Board Position
The Role of the Director
Keeping Your Board Strategic | Ep. 43
Questions to ask at a Board Interview
board and committee definitions